Geopolitical Update: A possible war with 2-3 fronts looms in the Middle East

There are a few geopolitical developments we are monitoring around the globe that could affect the world economy and markets, but there is one that is a matter of special concern for ten days already: the new situation in and around Syria. Since our assessment is now deviating from consensus considerably, I want to bring it to your attention.

Kindly remember that despite Europe’s embrace of China as new superpower and of the Petro-Yuan (i.e. secular decline of the USD), any major war with potential systemic effects is likely to lead to a higher demand for USD and US Treasuries. With possible spikes in Gold, Oil, insurance premiums and food prices. Despite the many challenges facing America, it is still the world’s military superpower.

The Convergence of multiple conflicts

Over the past 10 days the escalating exchange of fire between two alliances of necessities is becoming more serious. Russia-Turkey-Iran-Syria-Lebanon-Gaza-Yemen on the one hand and the USA-Kurdish forces-Israel-Saudi Arabia on the other are directly – or indirectly via their allies – firing at each other. In our view, it is one of the developments that has contributed to a recovery in the US currency in recent days. Should the situation deteriorate further, it could also begin to impact US Treasuries. 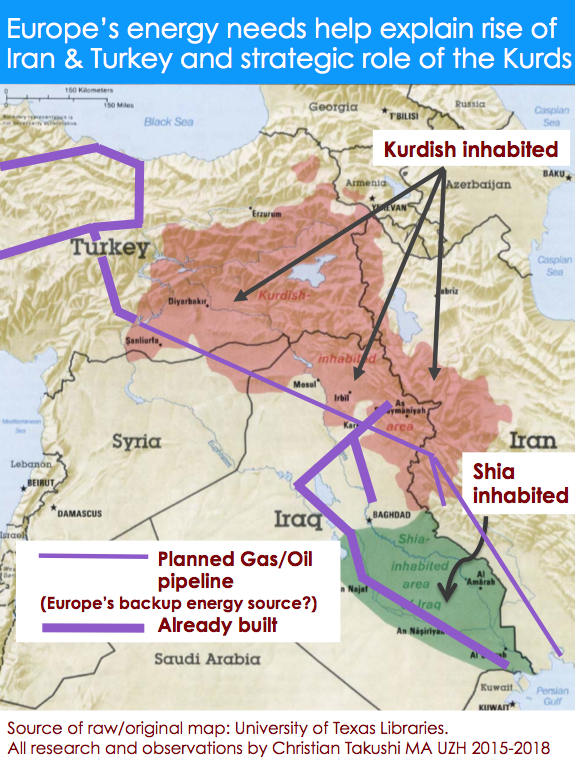 We are witnessing the rise or rather the resurgence of two ancient powers in the Middle East:  Turkey and Iran. Not least, because of Europe’s strategic energy ambitions – Something European leaders are silent about. This complicates Europe’s and Russia’s position in the Middle East. The West is divided and at a loss. Germany, for 50 years a supporter of Israeli security, is increasingly embracing Iran as a new regional ally. NATO state Turkey is attacking the US allies in Syria, while Saudi Arabia seeks Israeli military support. The role of Europe in the deteriorating geopolitical landscape of the Middle East is something few dare to talk about.

Israel runs the risk of being engaged on three fronts: Lebanon, Syria and Gaza. In fact Hezbollah, the Syrian Army, Iranian and pro-Iranian forces and Hamas are gearing up for war and a campaign of media attrition. Should Israel struggle at multiple fronts, Saudi Arabia fears for the effectiveness of the US-Israeli nuclear (pre-emptive & counterstrike) shield that serves as deterrence against Iran. Iran has simultaneously deployed advanced rockets and missiles into Yemen.

Saudi Arabia fears that Iran has already used the hard currency that the former US administration flew from Switzerland to Teheran to purchase enriched Uranium – making the US-Iran Nuclear Deal de facto a shield for Teheran’s Ballistic Program. Ryad fears that it may soon be deployed on Iran’s advanced mid range ballistic missiles or conventional rockets (to be fired from nearby Yemen).

The facts that we have gathered

1) The new Turkey-Iran-Russia military alliance over Syria is changing the balance of power in the Middle East – Turkey and Iran are advancing their military forces and positions much more aggressively than in recent years. Iran has now de facto control over vast parts of Lebanon, Syria, Iraq and Yemen.

2) Iran is building heavy military assets and advanced intelligence gathering capabilities in Lebanon, Gaza, Yemen, Iraq and Syria – moving them ever closer to Israel and Saudi Arabia. Rocket and missile launchers are reportedly being positioned in populated areas. If Israel or Saudi Arabia attack them, civilian casualties could be high. A strategy Hamas and Hezbollah have effectively used in the past to make sure that Israel looks bad no matter what they decide to do.

3) The current US Administration doesn’t want a major conflict ahead of the Mid Term elections in November 2018. Trump’s top priority in 2018 is to retain the GOP majority in Congress.

4) We have indications that President Trump has asked Israel to show restraint until Fall 2018 and to slow down settlements in the West Bank. US forces have shown restraint and focused on containment, i.e. letting the Iranian and Turkish offensives prevail and limiting counter strikes to localised targets. This means that advanced irregular Kurdish troops are being let down by their allies: A calculated risk. But in light of the Iranian military build-up in Syria, we ascertain that on Feb 9th the Israeli Supreme Command gave orders to engage with massive force if necessary.

5) Prime Minister Netanyahu has given President Putin an unequivocal warning that unless Moscow reigns in on Iran, Israel will be forced to launch massive preemptive strikes: the result could be war. The Prime Minister came under fire by Israeli analysts and media for giving Moscow few options, but we think Netanyahu is convinced Putin doesn’t want Russia to be pulled into a war before the FIFA World Cup to be held in Russia during June-July 2018. Russia wants to break out of her isolation. 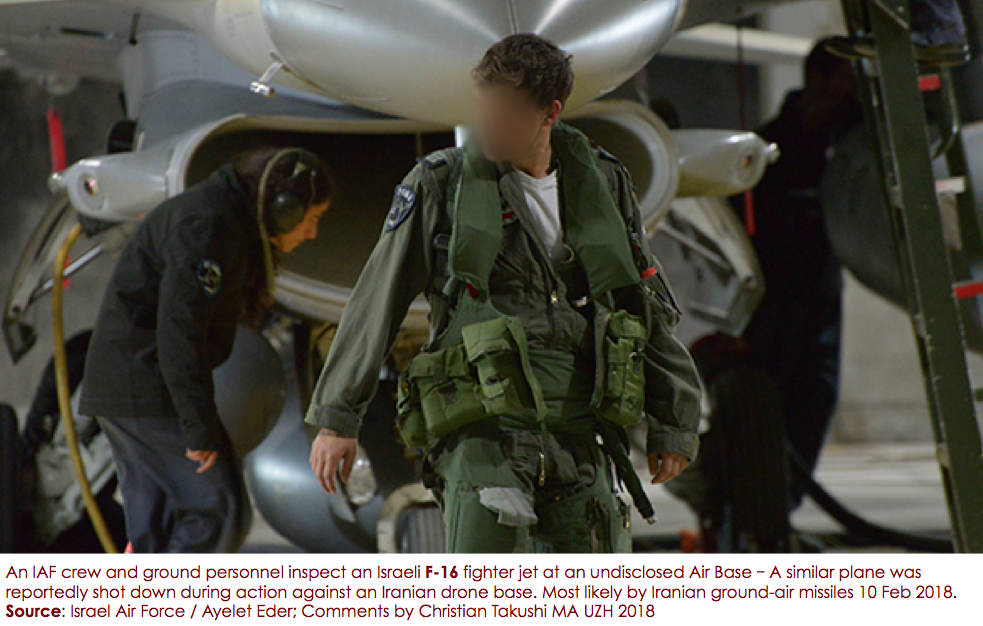 6)  Israel has begun with widespread drills to prepare for simultaneous emergencies at multiple fronts. The intense preparations by the 669 Search & Rescue Fighter units show that Israel fears air combat losses and more pilot ejections. Based on our independent analysis, the Iranian offensive drone incursion into Israel last week was aimed at luring Israeli F-16 squadrons into a trap over the air space South-West of Damascus – The IAF F-16 fighter jets were met by a massive barrage of anti-aircraft fire. One Israeli F-16 was reportedly lost, but it could have been far worse.

7) Iran is arming Hamas in the Gaza Strip, and Hamas is additionally seen by different observers as staging or tolerating a collapse of vital services in Gaza to trigger a major humanitarian crisis. Since the UN authorities in Gaza are not reporting it to the public nor calling for an independent investigation, we can assume that the blame is likely to be laid on Israel. Thus, Iran and Turkey are stepping up a military & media offensive against Israel and Saudi Arabia.

Our most likely scenario in case of an armed conflict: Israel pulled into a war with Lebanon (Hezbollah), Syria and Gaza (Hamas) along a humanitarian crisis in Gaza

a) Turkey and Iran are working together to force Israel into a humanitarian crisis or into war before Fall 2018. Their goal is to discredit Israel and to bring a UN resolution upon Israel that opens the door to negotiations over the status of Jerusalem. Either Israel shows restraint and it suffers losses leading to the collapse of the conservative government or Israel attacks and is discredited for the loss of civilian lives.

b) Israel may not be able to show restraint until November 2018 – At the current pace heavy Iranian military assets & missiles could be deployed by the end of the Summer that could cause unprecedented civilian casualties in a surprise attack before Israel could effectively neutralise them. A risk Israel can’t take.

Israel is likely to risk a temporary cooling of relations with the USA, to press ahead for a solution or war ahead of June 2018.

c) In the past Israel has chosen to attack with massive force when they knew that war upon them was inevitable. While Washington can afford to think in terms of years and presidential terms, Israel faces so many existential threats, Fall 2018 is excruciatingly far away.

Despite there being different competing scenarios, any major military fallout until June 2018 is likely to lead to a higher demand for USD and US Treasuries. At the same time Oil, Gold, insurance premiums and food prices could also see temporary spikes. Should the cost push effect on prices result in longer term effects, then inflation premiums could lead to higher yields again. A Risk Event closer to the US Mid Term elections (Fall 2018) would complicate the economic impact and calls for re-assessing the impact. The region is nevertheless unpredictable and it is possible that both Washington and Moscow could still reign in on their allies to avert a wider military conflict – This not for the sake of peace though, but in order to attend to the upcoming domestic elections in both the USA and Russia.

Having said that, this time the convergence of so many conflicts poses higher risks. Washington and Moscow might be tempted to allow the long simmering pressures to be released and a war to erupt: After painful military conflicts, the willingness for compromise & peace talks in the Middle East has been more visible and frequent. A conflict may be just what Trump needs to kick start the Peace Process, while Moscow has also a lot to win from a new war (not just higher oil prices).

So far a political and humanitarian crisis overlaid by a media campaign against Israel & Saudi Arabia are more likely than a war. But this could change quickly, thus we are monitoring the Middle East closely.

We are monitoring this situation closely – if new intelligence, information or analysis changes our assessment, we’ll issue an update.