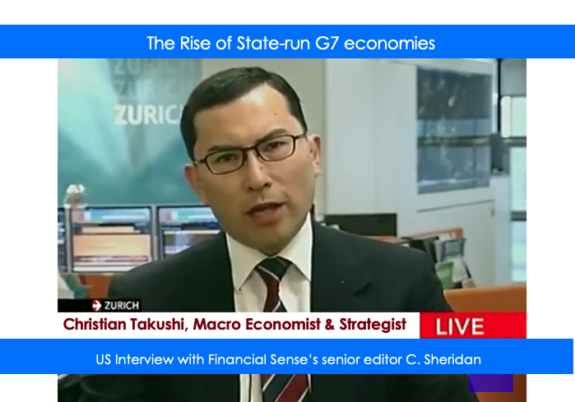 Mr. Sheridan recalled Takushi’s call made initially on Dec 16th 2021 that markets will be sacrificed by the FED to cater to US voters, thus 11 difficult months lie ahead for investors.

Indeed – as soon as the Mid Term elections were behind us, US markets stabilised.

The interview in full length is a courtesy of FinancialSense.com

You can visit them at https://www.financialsense.com/

Western and Oriental powers are reviewing their alliances – They are shifting.

After warning for years that the FED and ECB policies may have become the biggest threat to our National Security, Takushi is highlighting that G7 governments are seizing control of demand & supply. To this aim they are issuing gigantic state-guarantees on loans. It is possible, because markets have rescinded their oversight.

Thus our governments are becoming the main source of credit creation and deciding which companies will grow in this new state-directed economy. They are sidelining their own central banks just at a time that investors and media are listening to every tiny move & talk by FED and ECB.

It is in this highly vulnerable economy that the enemies of the West are advancing their interests. They could even strike harder. Our Central Bank policy is giving Russia, China, North Korea, Iran and even Turkey opportunities to strike at the West and hurt Western interests.

But what many experts overlook is that many formerly poor developing countries are now powerful nations with economies that are often healthier than the G7. The non-Western powers want to decouple from the Western Banking System and the USD.  This lends support to one of Takushi’s oldest forecasts, the rise of a Super State in Europe and other continents.

Macro Economist Takushi strives to give a balanced non-ideological analysis on world affairs. He focuses his research on developments that consensus is underestimating.  www.geopolitical research.com is non-partisan and avoids the use of conspiracy theories. Our balanced analysis is truly independent and entirely based on academic research, proprietary methods and databases.

Since 2016 among the Top 50 sources of geopolitical research

A distinct and balanced broad approach to geopolitical research