After eleven extraordinary days when the world of politics and geopolitics stood still to pay tribute to one the greatest leaders of our time, the global geopolitical struggle has resumed with force.

The USA is waging a smart war against Russia, China, the BRICS and other rising emerging powers that had decided to move away from the USD – with Europe being the ‘not so unintended’ collateral damage. It seems that most thought leaders in Europe are not fully aware of what they have walked into.

EU and UK leaders may have been outsmarted by Beijing, Moscow and now Washington.

We are watching the USD, Swiss Franc, Gold and Silver very closely. The price of gold is currently reflecting the massive leveraged bets on paper gold, rather than the real demand-supply of physical gold. Those that went into USD & CHF cash and gold last year are doing very well, but should not miss the time to exit an overvalued paper currency.

Investors are still somewhat day dreaming and in denial – whether in Europe or the United States, they are still resisting to price in the new Fed guidance and the geopolitical realities. In fact we could say that investors are completely ignoring the growing state of war between East and West – Although Gold is holding up well to the USD onslaught, Gold is trading lower than before Russia invaded Ukraine. We also could say that investors are to a certain extent dragging their feet and ignoring the shaky foundation on which corporate earnings and consumer confidence are standing. The top management of FEDEX has recently given a grim outlook of the world economy. The stock is trading 40% lower than earlier this year as a result. FEDEX is a true canary in the coal mine.

As a former fund manager and bank director I can tell you straight ahead that equity prices would have to correct another 20% (-20%) in order to price in the deteriorated global macroeconomic environment. I have not seen a more complicated and vulnerable picture in all the 34 years that I am analysing the major economies. This is not even discounting the very likely deteriorations ahead of us. If things stay on this path markets are in for another 30% to 40% correction. Long term US treasuries are leading the way with devastating corrections YTD and now the Housing Market is ready to give away part of its massive price inflation over the past decade. The super-strong USD is adding to the financial woes and the stress on all economies in Europe, Africa, Middle East, Latin America and Asia.

Among investors that until recently were enjoying the “TINA (there is no alternative), Everything Bubble and Fed Pivot” party .. it has become very popular and convenient to say that the FED failed to see the acceleration of inflation in 2021, thus the FED is reacting late. This assessment is widespread among economists, financial analysts and fund managers, but is wrong in my humble view.

Those that relied exclusively on financial and economic analysis are suffering major losses in 2022 – The world has entered a geopolitical period. A broader macro analysis that included geopolitical factors like US National Security called for and still calls for a very conservative asset allocation. Geopolitically minded investors were willing to pay negative interest rates on their Swiss Franc cash last year – The Swiss National Bank charged negative interest rates on cash deposits to discouraged people from holding cash.

Geopolitics and domestic politics driving the FED in 2022

While consensus thinks the FED simply misjudged the threat of inflation in 2021, we think the FED knew very well inflation was “not temporary” – It actually fanned inflation and let it gather pace on purpose during 2021. This is not a small detail – those that got this wrong are paying dearly and may not overcome what lies ahead.

The FED knew the inflation resulting from massive monetary-fiscal stimuli was finally reaching consumer prices with force in 2021 (after massively inflating stocks, bonds and housing) – thus, it decided to wait to let inflation gather more momentum, so it could shock markets and the world economy in 2022. In the 6 months preceding the Mid Terms.

As our independent geopolitical-macroeconomic analysis has been suggesting all along since last year the FED didn’t fight inflation and told investors “inflation is temporary” on purpose. There was actually no bad intention. In a way something had to change – the relationship between markets and FED had become dysfunctional and highly unhealthy – for too many years they were both in the same boat. The FED is not there to give “motherly guidance” to markets so that investors can make risk-free profits. To some extent the FED had to break away and move ahead of the markets. It has managed to do that in 2021-2022. At a price though – Many investors and companies may not survive 2022.

The FED has waited for an opportune time to break away and to sacrifice Wall Street in order to help the Democratic Party hold on to its Senate and House majorities as much as possible at the Mid Term elections this November.

Officially .. Washington institutions should not be partisan, but the truth is most US institutions have become pretty politicised. Thus, Washington is moving heaven and earth to avert a total sweep of Congress by the Republican Party. As one insider told me – “we view Trump supporters as a threat to our democracy, so everything is on the table to avert them taking Capitol Hill”.

The FED is being deployed for Domestic Politics, US National Security and the defence of democracy: by taking advantage of the war and driving up the USD.

Last year President Biden’s approval ratings were dismal – there was panic among Democrat strategists for the 2022 elections. Voters were furious about inflation. Now look: In the year of the elections the FED is fighting inflation bravely and it is sacrificing Wall Street to protect Main Street. Most US stocks are held by rich Americans (the top 10%). This “Robin Hood” FED is helping President Biden and the Democrat candidates in a most powerful way.

The FED is using the USD to wage war against US foes .. and

But there is more than just Domestic Politics in the genius strategy of the FED board for 2021-2023. Washington is deploying simultaneously the USD, Interest Rates and Energy as a powerful weapon.

As usual it is all about timing – The USD is being deployed as a superb geopolitical-economic weapon to reassert US power on allies and enemies alike – It is fending off a massive challenge against the USD as the global reserve currency and the US-led international security. Investors are late to realise that US National Security tops all other goals and that .. we are at war.

With a super-strong USD driven by both war in Europe and a steep rate hike cycle, Washington is ..

Personally, I don’t see EU leaders grasping what is really at stake. They think in their humanly altruistic terms that we are all “united” against a common enemy. We are watching for one another. Truth is .. we are not. As the Covid crisis laid bare in 2020, in the midst of a real crisis, every state is on its own.

Washington is on survival mode, so is Moscow and Beijing. This is about system survival .. the next few weeks could set the pace for the future of our old continent.

This is the current stage of my analysis. Things are fluid, so should factors shift, I will adapt my analysis accordingly. Be ready for change and disruptions. 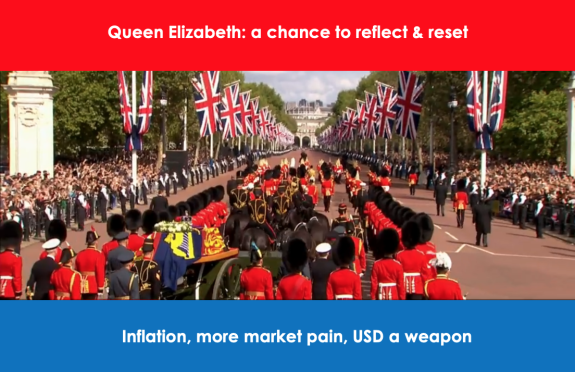 Since 2016 our newsletter is ranked among the 50 most reliable sources of geopolitical analysis worldwide. Now among the top 20.
Independent research and releasing a report only when we deviate from consensus adds value.