Geopolitical economic adviser Christian Takushi was interviewed by US journalist Ron Myers on 18 May 2022: Despite massive pressures, 82 nations are defying the West. 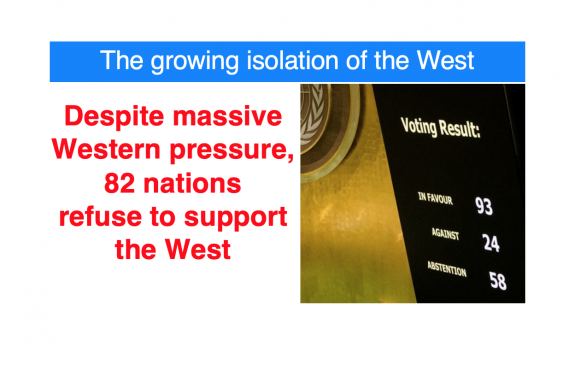 In our righteous anger about the desolation that has befallen the Ukrainian people and the war, many in the West have eagerly accepted a popular view:

The world is with us, united in support of our stance against Russia. There is the West’s view; and that of Russia & China.

Geopolitical economic adviser Christian Takushi gave a keynote speech at UBP’s Investment Conference last week – he focused on the much overlooked 3rd view, that of powerful non-aligned & multi-aligned nations (more than half of mankind). They are rather neutral and increasingly “walking away” from the West. Not because of the war in Ukraine, but because of

– our rampant money printing
– our double moral standards
– our threats we have used to force them to support our UN motions (our behaviour is deemed undemocratic & colonial)
– our willingness to freeze the USD and EURO reserves of other countries – Emerging nations think they can be next, so they want to diversify away from USD and EURO

Emerging nations don’t mind the West standing up to Russia, but they are very worried and angry that we are not just printing too many USD and EURO, we are now also willing to freeze (seize) other nations’ currency reserves. In fact, 2/3 of all the nations that have begun to defy the West are doing so because they are very angry and insecure by our weaponising of our currencies. This will take them time, but the process has begun.

Rising non-aligned nations are now actively looking for ways to stop buying and accepting our debased USD and Euros. In the process they are becoming multi-aligned.

Let’s rethink the condescending way in which we treat India, Brazil, Mexico, S Africa, Indonesia etc. The West is making strategic mistakes and many are reading only Western news that support our own views. That is not being well informed in XXI century. Sadly, many Western commentators are putting all nations that defy our Western view in one basket together with Russian allies. That could be tragic – we should not lump Russian allies (like Venezuela and Iran) together with multi-aligned nations (like India and Brazil) that are becoming exceedingly critical of our monetary-fiscal policies. These are two very different groups of nations. But our lumping them together and our threats against the likes of India is pushing many emerging economies into the arms of China and Russia – at least commercially. That, I believe, is a counterproductive for the West.

Much of our behaviour around sanctions this year is not in our own best long term interests. Our political leaders should stand up to Russia, but choose sanctions that hurt Russia and China more than us and our companies.

Since 2016 our geopolitical newsletter is ranked among the 50 most reliable sources of geopolitical analysis worldwide.

geopolitical research.com is out of the box, non-partisan and avoids the use of conspiracy theories. Apart from treating all leaders and nations with respect, Takushi tries to understand & forecast their next steps rather than passing judgement on them. His analysis is staunchly independent and entirely based on his academic research, proprietary methods and databases.