Executive Summary: For half a century the biggest threat to civilization was a frightening excess of nuclear weapons, but over the past 12 years and surely since Spring 2020 it is the frightening excess of paper money and the total lack of effective controls over those pressing the buttons. Actually most of the money in circulation has been printed recently. While symmetric “assured mutual destruction” kept us safe from a nuclear Holocaust, there is no such a safeguard with the new threat – rather the opposite, it is asymmetric. A formidable smart enemy – with little to lose and preparing for a confrontation over the past 7 years can now trigger a Geopolitical event that could throw vulnerable Western economies into a devastating disarray.

Understandably, many of us are so immersed in the Covid crisis and other headline news in recent weeks that the really important geopolitical and policy moves of our time could be missed out – not only by investors, but also business, political and military leaders.

At several speeches I am saying now for over one year that the Covid pandemic is not the most important event of our time. The crises and disruptions around Covid are rather the accelerator of a large cluster of  converging processes in the geopolitical, macroeconomic, monetary and financial realms – often flawed strategies and policies simply being exposed. Those processes have been in place long before Covid. The most dramatic event of 2020-2021 by far is in the Monetary-Fiscal policy realm. Those focused on the pandemic may miss this.

The potential damage of the current policy mix ending badly is likely to be significantly worse than the pandemic. Economic collapse combined with war could claim millions of lives and destroy the infrastructure too.

Not many people seem to be aware that the current unprecedented economic policies could lead to a devastating depression, economic collapse, chaos and even war. In all of them security at national or personal level could be compromised.

I’ll be straightforward: The current monetary experiment with massive money-printing to finance deficit-spending is not only weakening Western economies, risking a massive economic-political crisis, but also making the West highly vulnerable to an external shock, a surprise attack or an intentional geopolitical reset. Somewhat logically, Moscow, Beijing and Ankara are increasingly trying to exploit the unprecedented economic and monetary predicament we have maneuvered ourselves into.

Amongst the most probable scenarios, I am monitoring in particular the scenario of how a well timed single military crisis in the Middle East could usher a Super Crisis on the West: a fulminant collapse of Europe’s supply chain, a financial market collapse, an oil-price shock and food inflation & shortages.

The European Union would be the most affected economic block, followed by China. The United States and Britain would suffer also, but are likely to cope with the simultaneous and cascading shocks better than the old continent. Thanks to their geographies, dependable allies, well organized Armed Forces, their ability to  protect their trading routes and the steady leadership of their military institutions, these two nations and to a some extent extent also Australia and Canada could emerge as winners after an initial implosion or shock. This scenario doesn’t simulate a direct strike on Western nations though.

While an external shock (deliberate or not) like the above could hit the West hard, I currently expect that three years into the shock the Anglo-Saxon nations will have weathered the storm much better than the Continental European powers. Initially the West has much more to lose from a global shock than Russia, but in the aftermath the West will be a heterogeneous field of many losers and some winners. With the EU unable to shake off its large energy dependence on Russia, its dependence on China takes on a very different strategic magnitude as US trade dependence on China.

In this scenario a US-UK-AUS alliance (de facto including Canada) would emerge leaner and meaner.  Although geography greatly favours Anglo-Saxon economies like the USA, Britain, Canada and Australia in the current global geopolitical-macroeconomic landscape, Continental powers have made grave strategic errors of their own over the past 40 years. Continental European powers simply tend take security for granted – To the point that in the 1990’s they believed the flawed economic concept that with increased global trade there would be no more conflicts, hence they dismantled their Armed Forces. I state it often: Overt pacifism attracts aggression and leads to conflicts. Continental European militaries are, to a large extent, only fit for UN peace keeping operations. Thus, the EU can barely defend herself – why should anybody enter a serious military alliance with her?

Given the fact that the outcomes of current monetary policy could have destabilizing effects on Western nations and even usher their collapse or invite a military aggression, I believe that it is time that top officials from the National Security complex are allowed to oversee or monitor monetary policy decision making (i.e. central banks). If the monetary balance sheets, gold reserves and the measurement of consumer price inflation would be externally audited, it is important to preserve the necessary secrecy to protect central banks’s long term credibility.

At the minimum, I believe that strategists and top officials of the Armed Forces and National Security apparatus should be allowed to support and monitor what central banks are doing. At least that way the security apparatus and Armed Forces could take flanking measures to better safeguard law & order and deter potential aggressions.

As a macro economist that follows monetary policy for over 31 years, I can openly say that no seasoned central banker is fully equipped to handle the complexities that National Security Risks represent. Policy makers need support. 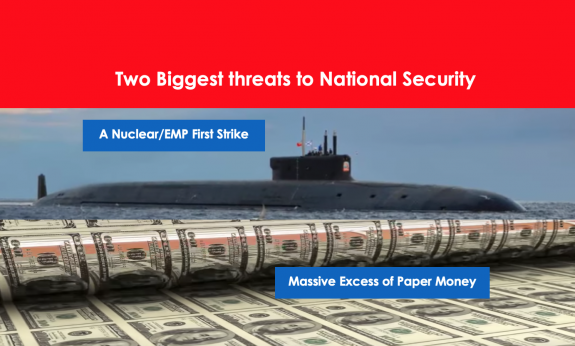 Bottom line: Central bank policy and Fiscal policy in the West have become potential sources of dangers to the National Security of most G7 states.

Consensus among experts is part of the problem

In a way, all key government institutions should begin drawing contingency plans “of their own” and hopefully concertedly for systemic disruptions as a result of our monetary policies.
One big problem will be the “closed ranks mentality and consensus“ among so-called experts. London might be big metropolis, yet a small town when it comes down to what is the prevalent academically acceptable view on an issue. We should remember that the consensus in Britain among experts at the end of the 1930’s pretty inflexible and almost cast in iron – Mr Churchill and his views were a significant outlier.

Several Western administrations are using the Covid crisis to take failed and controversial policies to new extremes .. in a way that would be unthinkable in normal times – Armed with unprecedented discretionary powers and with compromised or inexistent checks & balances .. fiscal and monetary policy makers are exposing the West to the biggest vulnerability the West has seen since the 2nd half of the 1930’s.

Recent extreme policy changes are barely catching the attention of political, corporate and military leaders. Covid crisis management is in a way having the effect of a smoke screen.

Too easy .. to blame it all on policy makers

While many people see in all this a deliberate move by world leaders to bankrupt the current system and introduce a new system, my independent analysis points to a less dramatic scenario.

I see rather a systemic failure, in which all agents in society are involved to a lesser or greater extent. Policy makers are doing exactly that what they are expected to do – they are doing their best within the confines of a dysfunctional and somewhat decaying political process. A political process that is vastly dominated by large corporations, mass media and pollsters.

A coordinated evil intent by G20 policy makers cannot be ruled out, but why resorting to such assumptions if the current policy steps can still be well explained by the increasingly dysfunctional political process of the affected nations.

Nevertheless, consumers, corporations, investors and even retirees cannot simply blame central banks, since they are also part of the problem. The attitude of corporations, consumers and investors along “we want no pain, no corrections and no recessions” greatly limits what central banks can do. My humble advice is “we are all in this together, we could use our energy to better prepare for the shake-up and transition that lies ahead.”

Over the past 18 months I have spoken about the remarkable event happening before our eyes: financial repression. Let’s elaborate a bit more on this phenomenon.

Financial repression and the fall of morality

What are business, political and military decision makers underestimating? Administrations have announced massive aid packages and huge investment plans although they have no such money at hand.

Not everyone seems to be fully aware that our highly indebted governments are financing this massive spending with new debt and money printing of huge proportions. While insurances and pensions are forced to buy negative yielding bonds (which in turn are wreaking pensions), normal investors stay away from them, forcing governments to simply print huge amounts of new money. This money ends up in the stock and housing markets, feeding a 12-year-long artificial “buy everything” rally.

The current financial repression is destroying pensions, punishing savers and rewarding only those that are borrowing money to buy already expensive stocks, bonds and real estate. The problem is that the stock, bond and housing markets have decoupled from economic realities. How long can central banks keep them up artificially?

Since the Covid crisis began Western governments have dramatically accelerated this financial repression, which is working as a massive tax on the middle class – lowering net real disposable incomes and worst of all, punishing good habits and rewarding reckless habits. Many people have told me “goodness, thrift and uprightness doesn’t pay anymore, it’s actually punished”.

The massive open gap of “rising inflation and zero interest rates” (see chart above) is impoverishing the middle class and making millions of people dependent on more government hand-outs. This monetary policy has the potential to shift politics to the “left” for years to come in some affected industrialised countries.

Many voters will only be able to partially restore their real purchasing power by electing parties that will promise even bigger handouts. Parties with a track record of deficit spending will have a much more credible electoral platform. What voters probably don’t know is that this money is debased. Most of the money in circulation in the West has been printed in recent years, if not the last two years!

Biden shifts to the center – takes FED along

The shift to the center by President Biden after two important defeats forced him to re-nominate Mr. Powell as chair of the FED – this time with a centrist mandate. The expected shift to the left had to be corrected. President Biden had to make a course correction to avert a disaster in the next Mid Term elections. Democrats believe, conservative snow hold a 9% advantage on national level. There is a sense of fear, if not panic. Hence the shift to the center away from the expected left-tilt.

Powell II is in a sense no longer Powell I. Not necessarily just more hawkish. Something not many investors fully understand. 2022 could be a shocking surprise for them. This new policy mandate is already having an impact on market expectations and the USD. Central bank policy is becoming less and less independent – it is increasingly driven by geopolitics and domestic ..

Since 2016 our newsletter is ranked among the 50 most reliable sources of geopolitical analysis worldwide.
Independent research and releasing a report only when we deviate from consensus adds value.