Geopolitical Update : 22% unemployed in May – And US Consumption?

Given the delay in official data during this crisis, I am calculating current unemployment rates using our own independent statistical database and proprietary methods – we use official data wherever possible.

Official data is more delayed than usual. And that in itself is not accurate due to the fact that US agencies are overwhelmed. Thus, I believe in times like this it is worthwhile to have a “real live” estimate for current unemployment and GDP.

FED chairman Powell also spoke this week and addressed unemployment and labor markets. I have made an independent analysis of that and a few other developments consensus is only scratching at the surface.

Based on our independent estimates US unemployment will reach 22.4% this month of May.

We estimated the real rate already above 18% in April, the US government reported it as slightly above 14%. Meanwhile German unemployment has edged up to 5.8%. See the chart below. The difference between the USA and Germany, Europe’s economic engine, could not be more striking. 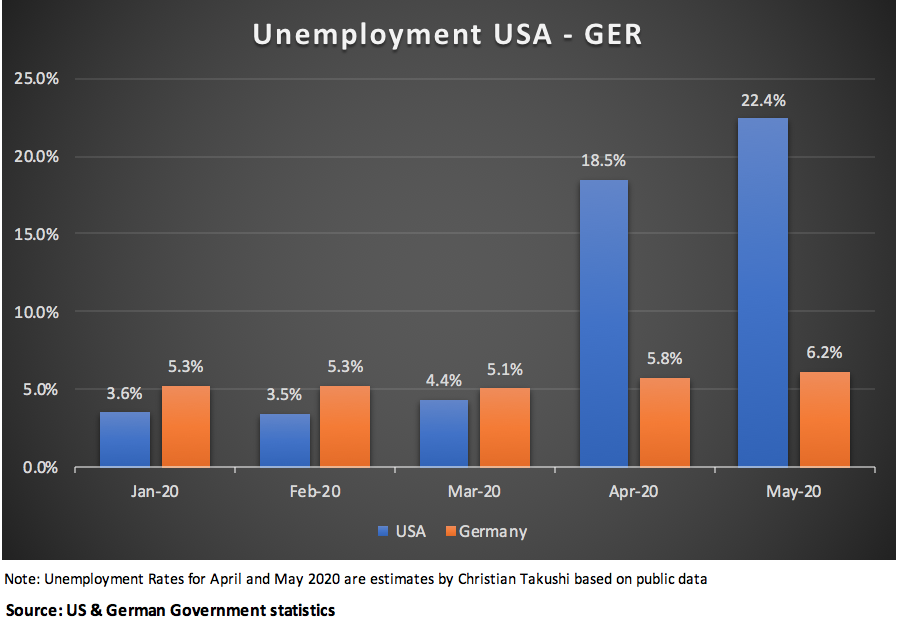 Unless the policy chaos in the USA can be contained, unemployment could de facto reach 30% – official and hidden unemployment. I am convinced that the lack of a coherent national strategy has made unemployment worse than expected – and you cannot simply blame the White House for that. With a coordinated response the unemployment rate would have been 15% in April and hover around 19% in May.

The hidden unemployment numbers are big and they amount to at least 4% of the labor force. Most of it will never be reported though. That is just how the system is set up.  Currently our main scenario sees peak unemployment at 26%.

The long way back for 21 million

While half of those unemployed Americans should quickly go back to work as businesses re-open. The other half (roughly 13% overall or 21 million people) may have a more difficult path back to normal employment. Some 7 million are likely to find some suboptimal income, be under-employed and off the statistics, but for 14 million the next two years could be a grim up & down.

This is exactly the point that FED Chairman Powell was making this week. The USA could be facing an elevated structural unemployment of 8% (my forecast) in the coming years. I agree with him – the rescue packages are not enough. Not least, because those who are first to benefit from it are those who need it the least. Big firms and those with lawyers and accountants are reportedly getting most of the money paid out and the fastest. In some states the antiquated and underfunded IT systems of the state are barely coping, which also hurts the “small man” on Main Street.

My numbers for April and May in the USA are slightly higher than what is officially reported or estimated. Example: official stats for April could only consider claims up to the middle of April. I have estimated claims for four full weeks in April. Our numbers give a more synchronised picture of what is happening right now on the labor market. While we may spend considerable time calculating the data, we are nonetheless aware of the gigantic social pain these figures entail. Not even during the Great Depression did economists see such a rapid job destruction.

Our “real live” estimates for unemployment or GDP give investors and business owners a more realistic indicator of current conditions.

Based on our economic model and the latest data feed, the economic recovery in the USA is being pushed out by three weeks or almost one full month. Rather than seeing effective job creation in the beginning of May, this is now being pushed into June. Barring any new negative surprises, the 4th week of May is likely to see some clear signs of improvement despite an overall negative month.

The positive news is that some firms have already begun to hire, but this is still overshadowed by the reported job losses – some of which are not new, but are only being processed now. We are thus dealing with several layers of delayed and distorted data.

For weeks Chair Powell is cautiously hinting at this: The USA may need a rethink. America has probably the best universities, the best clinics, the best research labs in the world etc. But how does it help, when 65% of the people living in the USA depend on an infrastructure that resembles a 3rd world country? This is something Americans that have not travelled the world in recent years may not be fully aware of. In fact thanks to fiscal discipline some developing economies now have better airports, schools and health care than a majority of Americans.

A general low regard for public infrastructure is probably one of the Achilles’ heels of several Anglo Saxon nations. As a result, US water and sewage pipes are often fixed after they burst or leak, while in Germany or Switzerland they are often replaced periodically.

Those European or Asian scholars that write off America for her degraded public infrastructure, calling it a 3rd world country, make a big mistake. Many developing nations can’t afford any better, the United States of America has chosen to put her vast resources elsewhere. It has been a political choice. Many blame the huge deficits, but that is only part of the picture. 40% of the Pentagon’s budget would suffice to put America’s infrastructure on a decent footing.

Nevertheless, this probably greatest nation that has ever existed, is currently suffering a dramatic loss of image and reputation. Millions of households without access to fresh water, fresh food and health coverage over the past two months has weighed on America’s image.

America’s most impressive and respected public infrastructure – apart from its superb division of power over several institutions – is its military.

European politicians say America has invested too much in its military – I tend to disagree with them. As a matter of fact, we are living in geopolitically dangerous times, and the ultimate power in economic-political terms is military power. No military power, no security – no security, no economic prosperity. America should have invested in both, defence and public infrastructure.

America could fix the issues, does it want to?

This current crisis is nevertheless exposing decades of underinvestment in multiples areas of this otherwise Great Nation. These are all areas of concern the world’s superpower could actually afford to fix over the next 10-20 years. America has the resources and the power to raise the money. The question is whether it is a priority for America .. or .. whether it bothers Washington that banks still use checks to send money, labs & hospitals are there primarily to make money, IT systems for public administration at state & county level are underfunded, power grids are outdated, schools are underfunded, road infrastructure is ailing, and that an accident or illness can thrust a hard working family into poverty within a few weeks.

The most powerful nation on earth may actually decide that it is OK and that her resources should be allocated to other priorities.

Being an international economist that studies interdependencies and spillover effects, I tend to think that America cannot afford to overlook these issues any longer. She risks that this crisis or the next external systemic shock could end her world supremacy or invite US foes to seize the moment. The domestic cohesion and peace is also at risk.

How many Americans are impaired in their Consumption?

Markets depend on the recovery of overall consumption. I have calculated that – a total of 155 million Americans are affected one way or the other by the current crisis. They are the children or the spouse or the elderly dependent of someone who has lost his job/income.

When people are in a sustained crisis mode, they tend to consume only the absolutely necessary or nothing at all. Millions of Americans are now relying on food banks to get something to eat.

We estimate that the current crisis is so far impairing the consumption of 155 million Americans – this is revenue that will be missing from US corporate earnings in 2020. These people, whether young or old are now living under elevated stress. I am not talking about just being stuck at home, not being able to see your friends, parents or not being able to go jogging at will. While almost half the country feels unduly curtailed in their freedoms, an almost similar number of Americans is struggling to make ends meet.

While the more trade-dependent European economies may have substantial declines in GDP in 2020, the United States faces more “complications” and secondary risks than Europe in 2020. The solid performance by Germany’s government has solidified Chancellor Merkel’s grip on power, but President Trump can’t relate to that.

As the fear of contagion and financial stress compound the political fault-lines and distrust across America, there could be complications and even some lasting impact delaying the return to normality. We already see this playing out in the chaotic way the USA is responding to the Corona Virus at state and county level. It is almost everyone for himself. The distrust and rhetoric are disrupting the formation of a coherent national strategy.

America is fighting two wars: and the fight against the corona virus is not the biggest one. The war against Corona is overshadowed by the war raging between Democrats and Republicans. Even the work of public servants and scientists is impaired by the virulent distrust. Neighbourhoods and even churches are split. I think the FED chairman is concerned about the overlap of these diverse trends over the next 2+ years.

Many investors view Corona as a serious but temporary phenomenon. I think they are wrong. The domestic Political War is likely to prolong the duration of the crisis. What could last 1.5 to 2 years, could potentially last 3 years – the return to full normality. That is not a blip nor a buying opportunity. Rather a trading market and potentially a cut-your-losses market for many investors. Such a period of time is long enough to potentiate the overlap of trends already in place before 2020.

Why America may need a rethink

America doesn’t need to spend only more money to rescue her economy (which it needs to raise or print), America needs a rethink or at least a slight course correction.

If America doesn’t address her structural social-political issues, in a few years .. large swaths of America may look more like a Central American republic plagued by violence .. than an advanced G7 economy. Feeding it are blistering ideological, economic and racial divides – along millions of “armed” people that increasingly distrust the central government. On the current political track, the right to own guns will be the ultimate political battle. This could increasingly take a toll on the health and resilience of the US economy.

This analysis leads me to think that we won’t go back to full normalcy anytime soon. Not because GDP won’t recover. Politicians and economists know what goes into GDP, thus, with money and the right policy steps they can boost GDP. That is not that difficult.

But while GDP catches corporate profits and overall trade very well, it has become increasingly detached from average people’s economic reality. Thus, the economy of nursing home employees, blue collar workers, hospital cleaners etc. will not fully recover. It will be simply an extension of a 40 year long trend as this chart so well exemplifies. 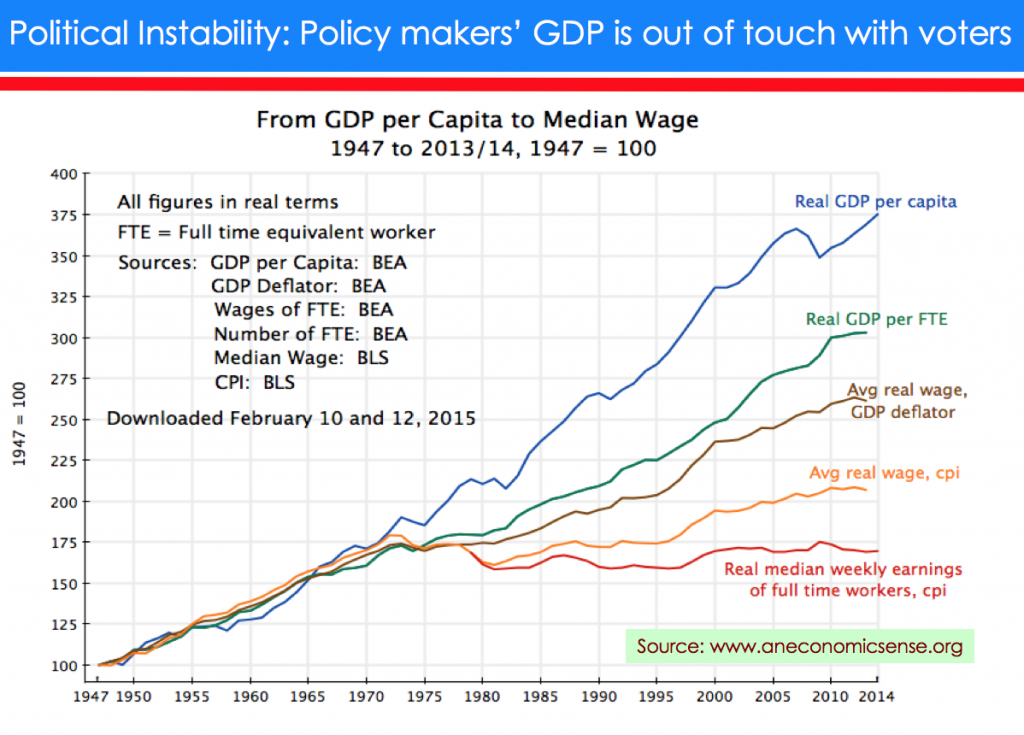 Looking ahead into the future – in the absence of corrective measures, I see America having an Armed Civil Conflict – very likely sometime in this ..

To read the full article kindly write to c.takushi@bluewin.ch 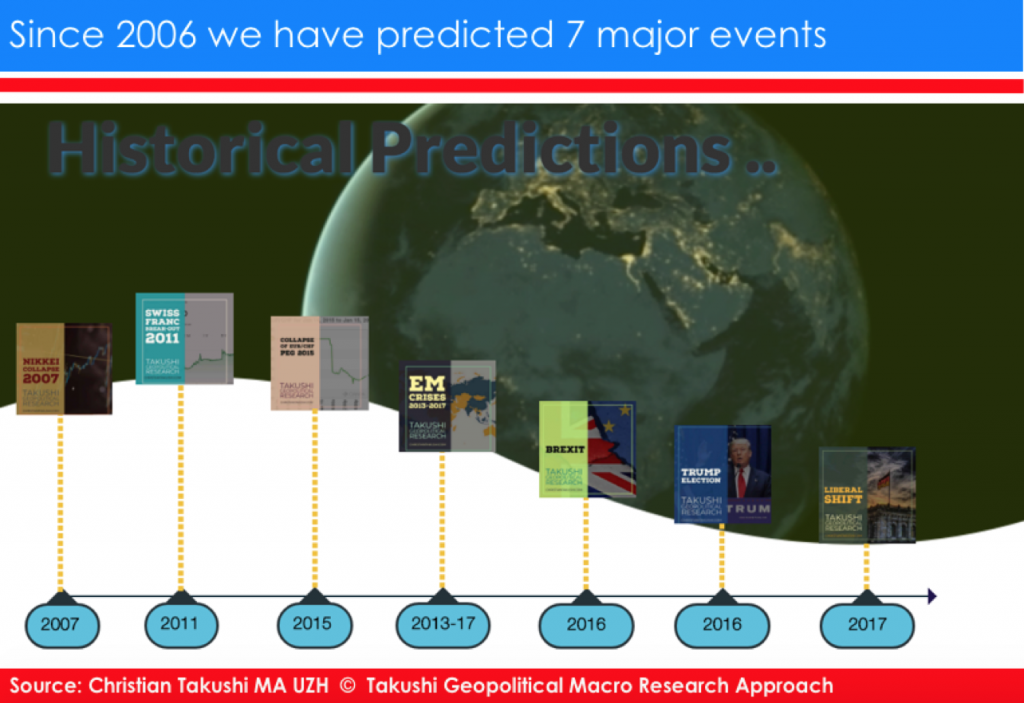